Talk To Us
band on a budget, but still want quality band merch?

need custom band shirts?
Seven ways to get more for your money with screen printing 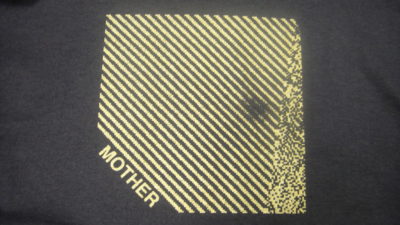 The shirt that started it all, the first print that the founder of Vacord made, for his own noise band.

Like getting the most bang for your buck? Of course you do, it’s totally natural. I’m the same way.

I started screen printing in 2006, and it was because I was cheap. I started a noise band with a friend of mine, and being in a band finally, I wanted shirts. So I asked a friend of a friend to print us some shirts, and, well, long story short, he wanted to charge more than I was willing to pay, and I was interested in screen printing anyway, so I got a little kit from the art store and made our own shirts. I learned then that screen printing isn’t always easy, and I recommend for people to buy shirts rather than try to make them.

But anyway, enough about my dumb old noise duo, let’s talk about how to afford awesome shirts.

Seven ways to get more custom band merch for your money...

1. Use discharge ink, not plastisol ink 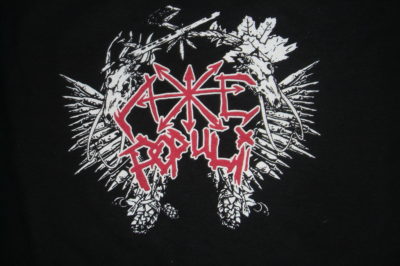 A lot of people don’t know what discharge ink is, but it’s not as disgusting as it sounds. Discharge ink is a special kind of screen printing ink that removes the shirt’s color and replaces it with another. On its own, it looks like a bleach effect. Working only on cotton fibers, pigmented discharge can put a design into the shirt, rather on top of it.

You know those shirts you have that feel like a layer of plastic on the fabric? That is actually a layer of plastic on the shirt. Discharge prints are embedded into the fabric, so they are very soft. With traditional plastisol ink, in order to do red on black, you would lay down one or two layers of white ink, then layer of red on top. With discharge ink, you can just apply a layer of red ink, and when it’s heated, it bleaches the black shirt to be white, and then leaves the red pigment, and boom, you get a super soft red on black print. It’s sick for a band shirt.

Oh yeah and the important thing here for our mission of cheapness is that it’s quicker to print. Time is money in screen printing, just like everywhere else in the world, and doing 100 black shirts with one layer of red discharge ink is way faster and simpler than doing a layer of white ink than a trapped layer of red ink. So it should be cheaper.

Some printers charge more for discharge ink, but they shouldn’t. We sure don’t.

2. Find out the volume discounts

Because of the complicated nature to set up and break down screen printing runs, people charge for printing based on volume, just like in most print industries.

3. Avoid being nickel and dimed to death on set up

Some shops have aggressive pricing per shirt, but you have to pay $20 per screen, so that’s sixty extra bucks on your 3 color design. And there’s a $20 press set up fee. And it’s $15 to mix that special blue ink you wanted, the one that doesn’t sound that special really. Oh, and shipping, don’t forget shipping. Ooh and you know what, you need a flash charge on that white, so that’s $0.30 extra per shirt. So your $5 shirts are really $7.91. Find a shop that tells you how much it costs per shirt, with no other nonsense.

KISS is a common saying in business, as in Keep It Simple, Stupid. That’s a good practice with screen printing, too, in order to keep things lower in cost. Since there is a different screen for every color, it’s more time and effort and cost on the screen printer’s end to print multiple colors.

So keep it simple. One color in one location is obviously cheapest. White discharge ink on black shirts can be very affordable and very attractive. If you want more than one color, you can do a lot design-wise with a second color for accent, but still keep it affordable, because two color screen printing isn’t that much more difficult than just one. But when you get into four colors on the front and three colors on the back, and maybe a sleeve print too, it’s going to start getting expensive. Keep it simple and keep it cheap.

A lot of people love American Apparel and Alternative Apparel shirts. And it makes sense to love them, because they are super nice. But they’re expensive. If you’re shopping for custom band merch on a budget, there are a lot of affordable options that are ringspun cotton (that’s the soft kind) in nice cuts.

Note that in some cases a nicer shirt doesn’t cost much more at all than a basic tee, so look into it. They’ll be easier to move at shows, too.

Like we talked about with volume pricing, it gets cheaper as it you buy more, so basically getting as many at a time as you can afford makes sense. Getting 48 pieces printed now makes more sense dollar wise than 24 today and 24 in a month. And you’ll definitely see savings if you order 200 now rather than 100 today and 100 in three months.

7. Find a screen printer sympathetic to your plight as a band

Tons of screen printing shops employ people in bands. Many shops were started by guys who have been in bands (ours included). So there’s a good chance that if you ask nicely, you might find a discount for band shirts. It never hurts to try. Bands are more fun and easier to work with than stuffy businesses anyway.

At Vacord, we love printing custom band merch. Need anything? Fill out the form below and we’ll get right back to you.

Thank you! Your submission has been received!
Oops! Something went wrong while submitting the form.

We help bands get great custom printed shirts and hoodies. We use soft inks to produce quality results at very reasonable pricing, and try to make the ordering process as easy as possible for you every step of the way.

Vacord started in 2006 after the founder Stuart wanted to print shirts himself for his noise band in order to save money. He got hooked on the craft and kept printing shirts long after the band split up.

Vacord has since printed for a ton of acts, from tiny bands to larger acts like Adam Ant. And we'd love to print for your band too.

Need pricing? have questions? Want to get started?

Need some shirts for your band?

Start the conversation. No pressure.

Use the form here to get a quote quickly emailed back to you, or answers to any questions you may have.

Would you rather email us? Reach out to us at info@vacord.com.

Thank you! Your submission has been received!
Oops! Something went wrong while submitting the form.